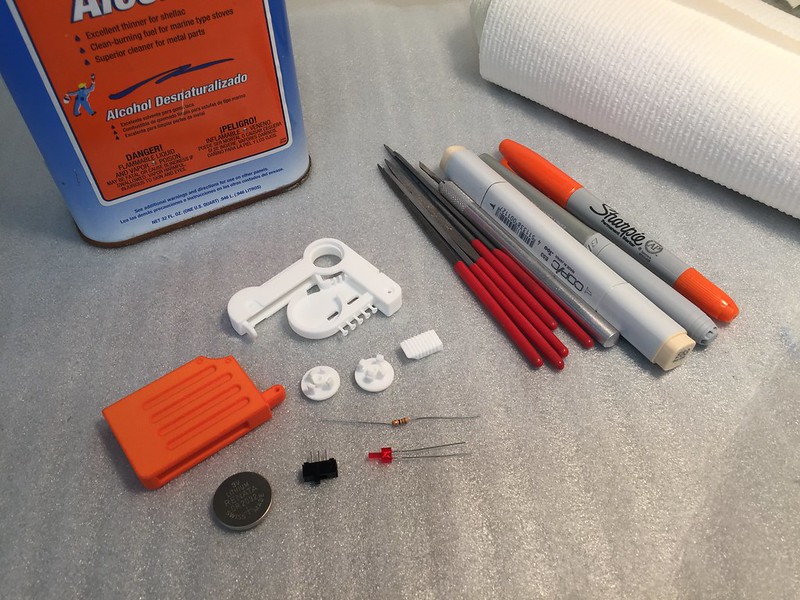 For this design I only needed the files and exacto-knife when fitting the spindle together. Everything else is direct from the 3D print, no sanding needed. 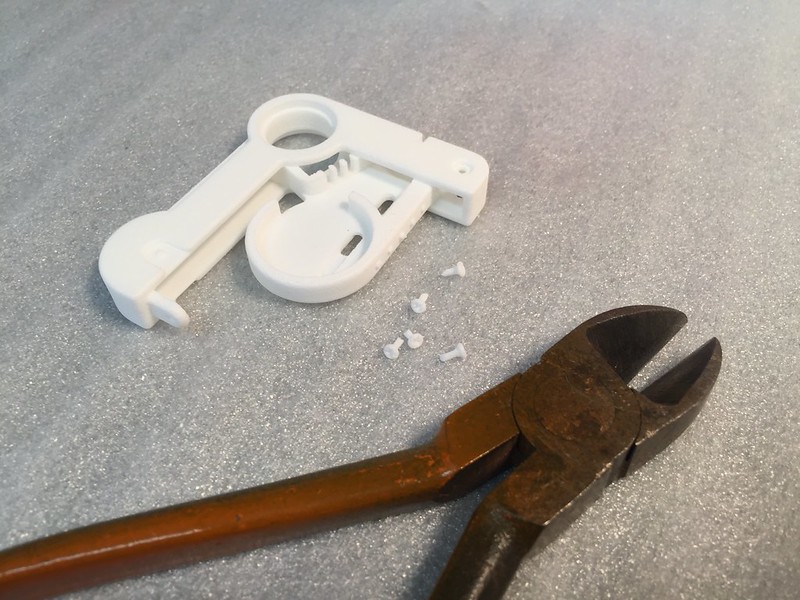 If you didn’t order the screws, you can use the faux 3D printed screws provided as part of the 3D printed model.
Simply clip them off of the rest of the white parts. 5 faux screws are a included incase you lose or break one. 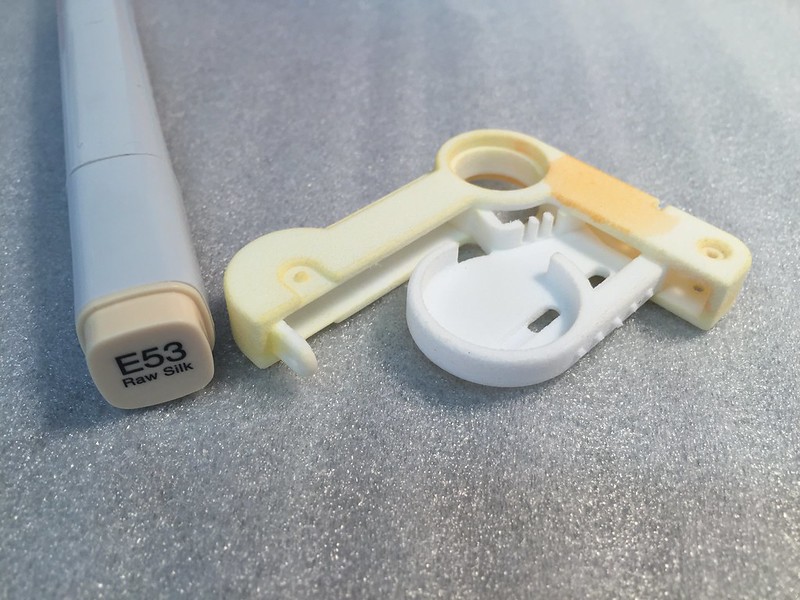 Next dye the larger portion of the Holotape. I used a Copic brand marker, “Raw Silk” color. The marker goes on darker then you would expect. So I first apply the marker, then use denatured alcohol to remove as much as possible. This left a nice off-white finish on the part. You could also use an airbrush to paint the surface. 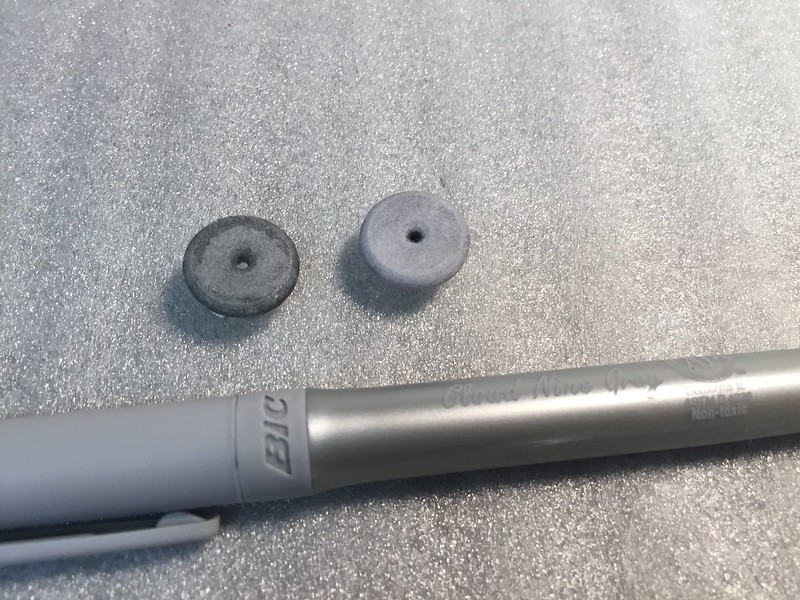 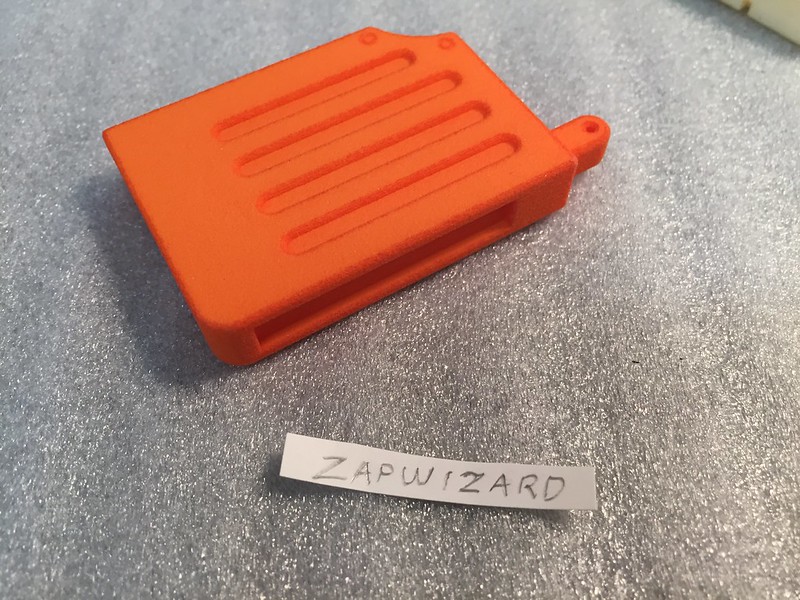 The orange parts comes pre-dyed by Shapeways and needs no additional work.
I made a label to the orange part by cutting up a adhesive shipping label. 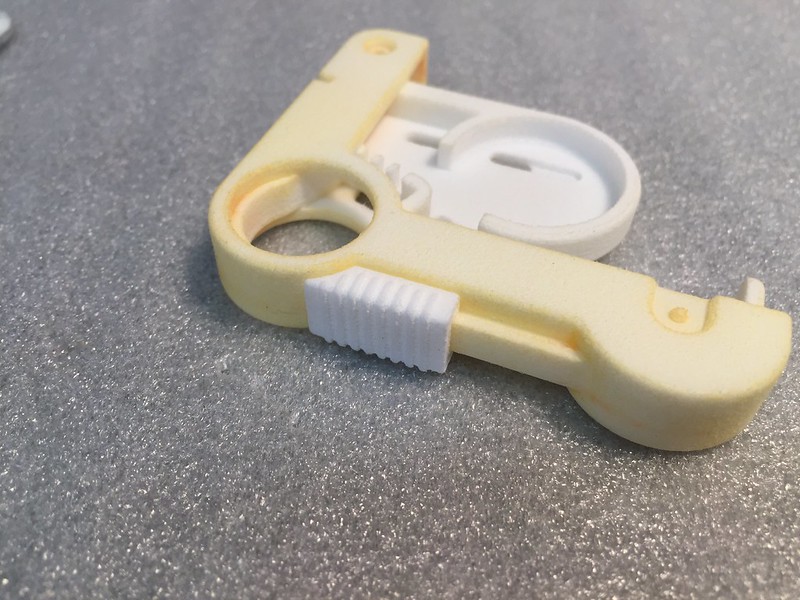 The dust cover door simply snaps onto the rest of the assembly. 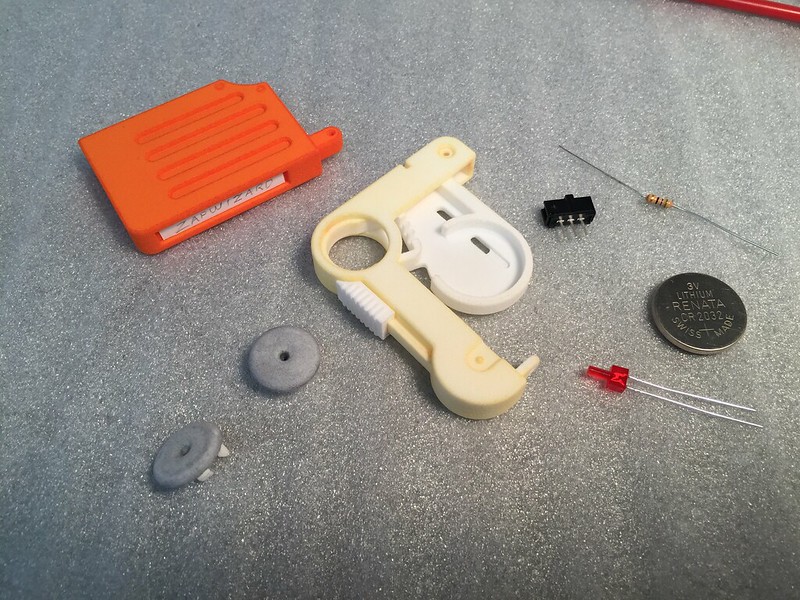 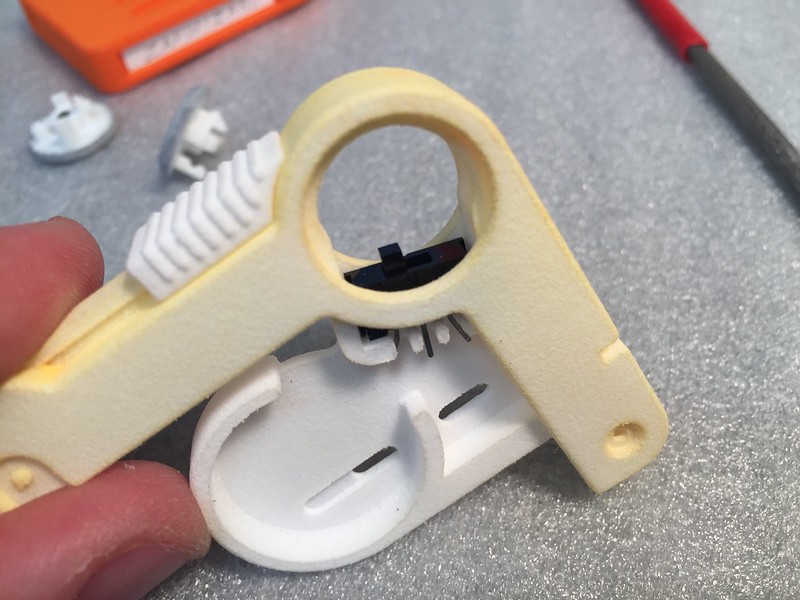 Install the toggle switch. It simply slides into position, no glue needed.
To temporary hold it in place, you can splay out the legs a bit. 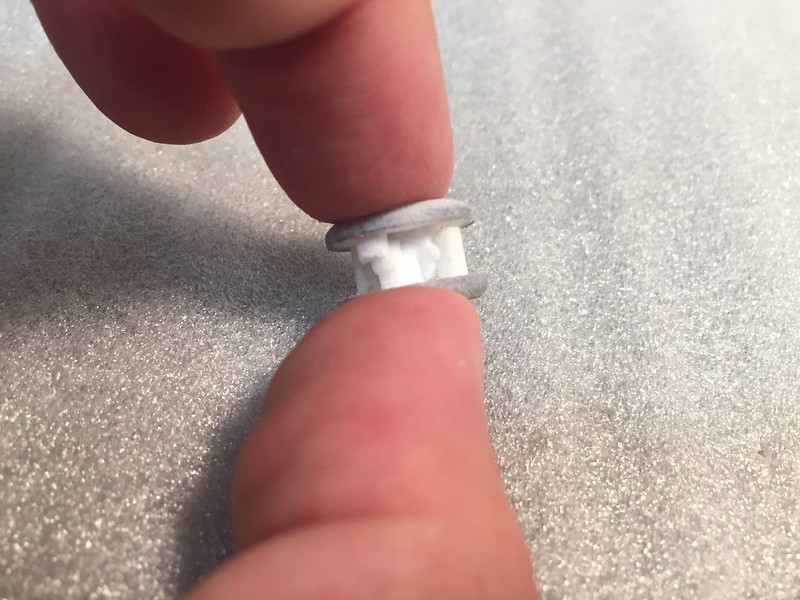 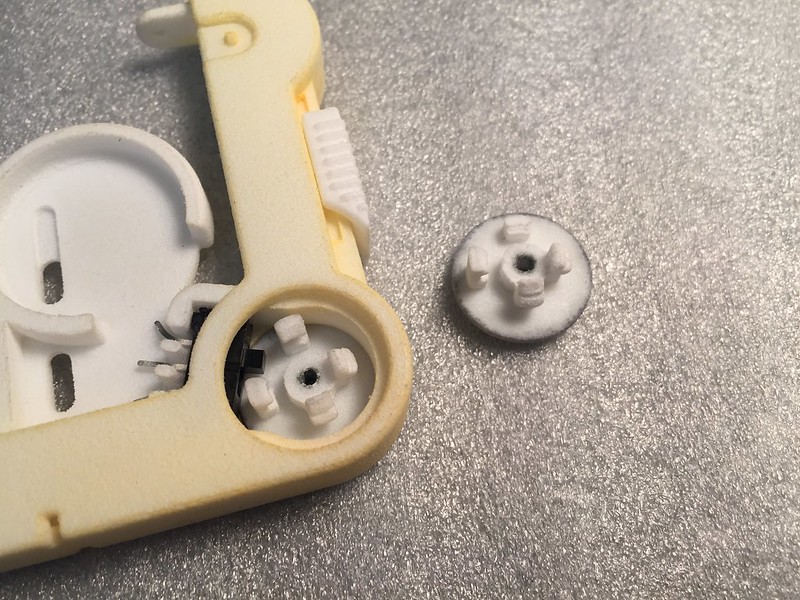 The two halves of the spindle are designed to snap together around the switch. I found I did need to carefully file the snap-fit parts a bit to get them to mate, even then one leg ended up breaking off. Even with three legs the spindle holes together well. You can separate the two parts by twisting them apart from each other.
You can also glue the two halves together if needed. Take care not to get glue on the edges or switch. 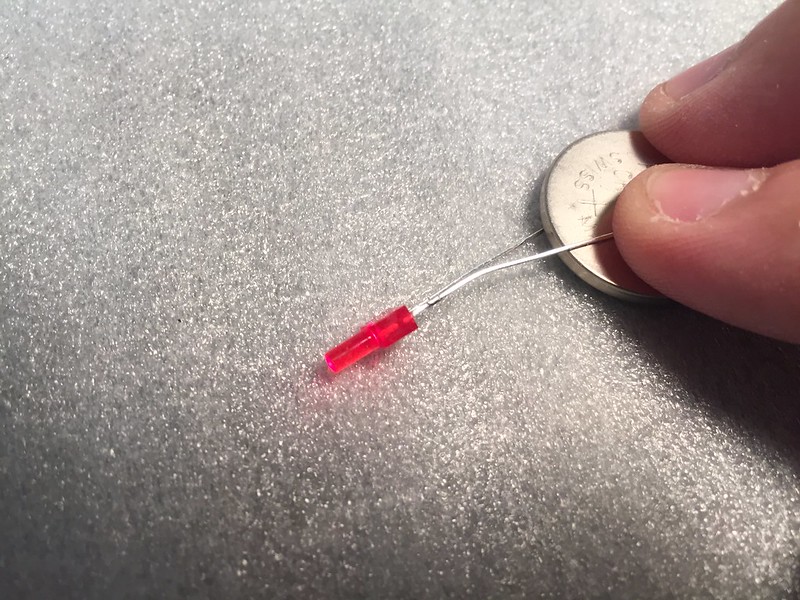 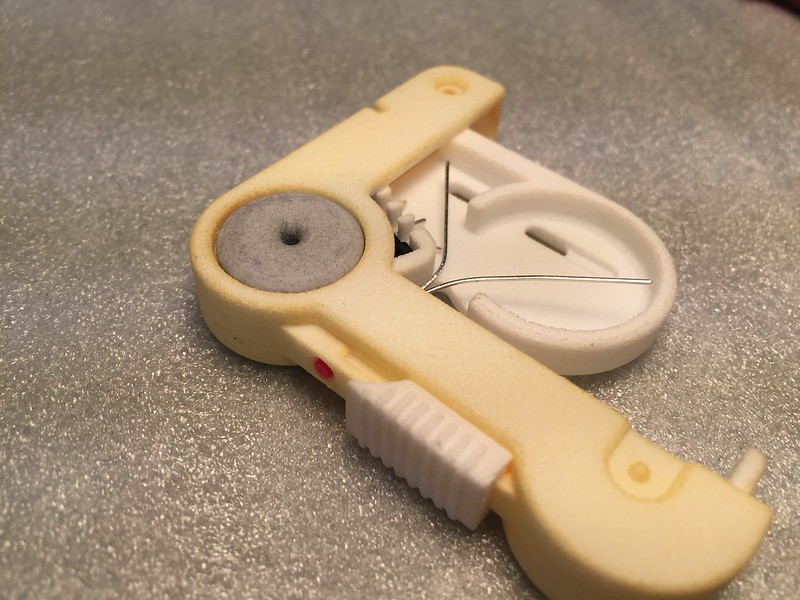 Test the LED and battery. You can do this for a few seconds without the resistor in the loop.
Take note of which leg of the LED needs to contact the positive (+) side of the battery. It should be the longer leg of the LED.
Install the LED into the hole. I found that test-fitting it from the back helped clear the hole of powder, but no drilling was needed.

Bend the short leg of the LED towards the switch, and the long leg towards the battery holder. Take care that the legs don’t cross. 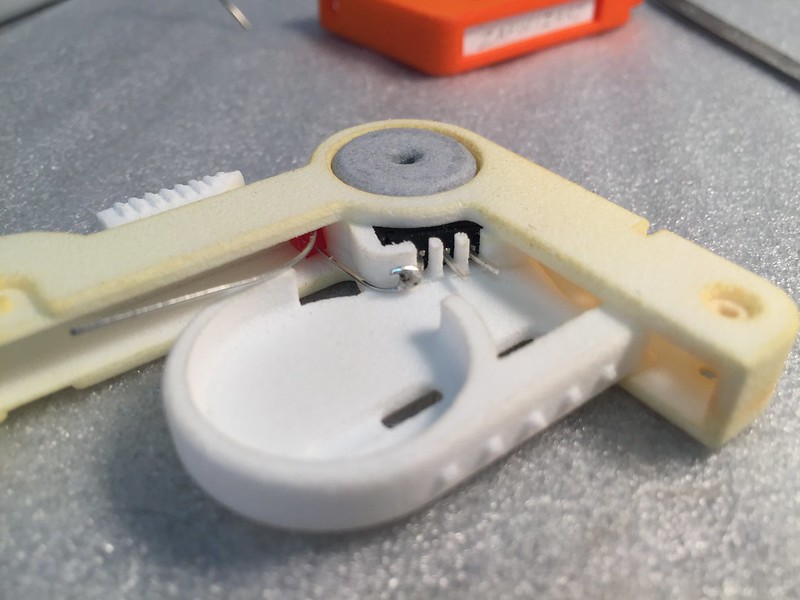 Clip, and then solder the short leg of the LED to the nearest terminal on the switch. 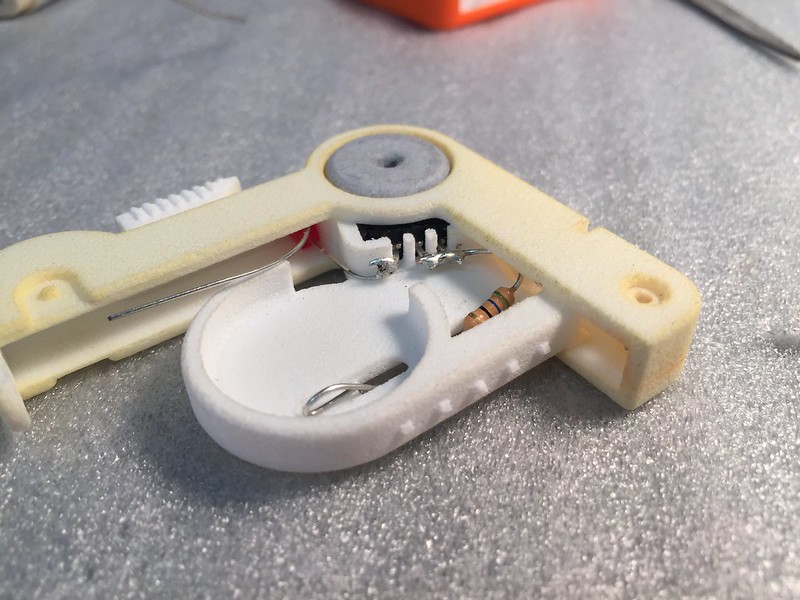 Bend on end of the resistor into a small loop. The loop should be no larger than the recess shown in the battery holder area. Position the loop such that it acts like a spring against the battery.

The other end of the resistor goes up into the slot, and solders to the other two terminals on the switch. 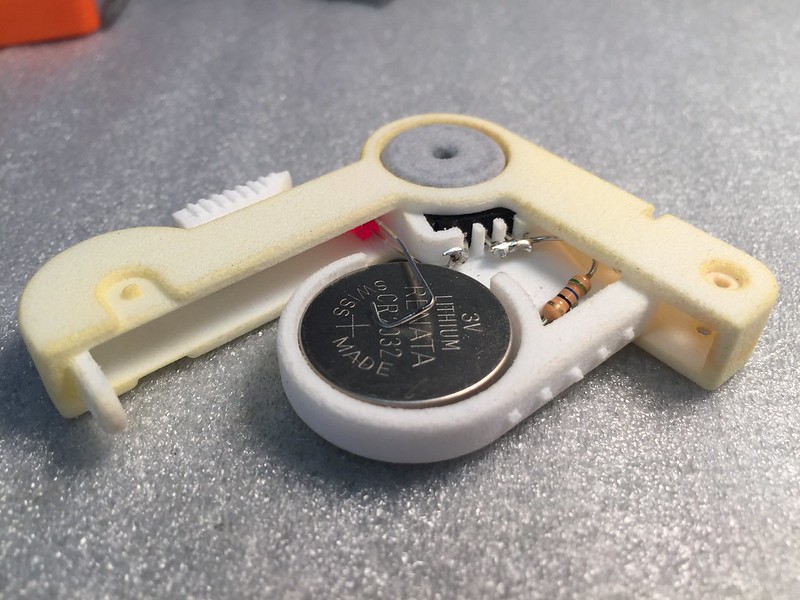 Install the battery. Then bend the long-leg of the LED into a loop. You should be able to twist the spindle and test the circuit. If the LED doesn’t light up you may have wired it backwards. If you did this you can simply flip over the battery, however you will need a piece of electrical tape to insulate the leg of the LED against the edge of the battery. 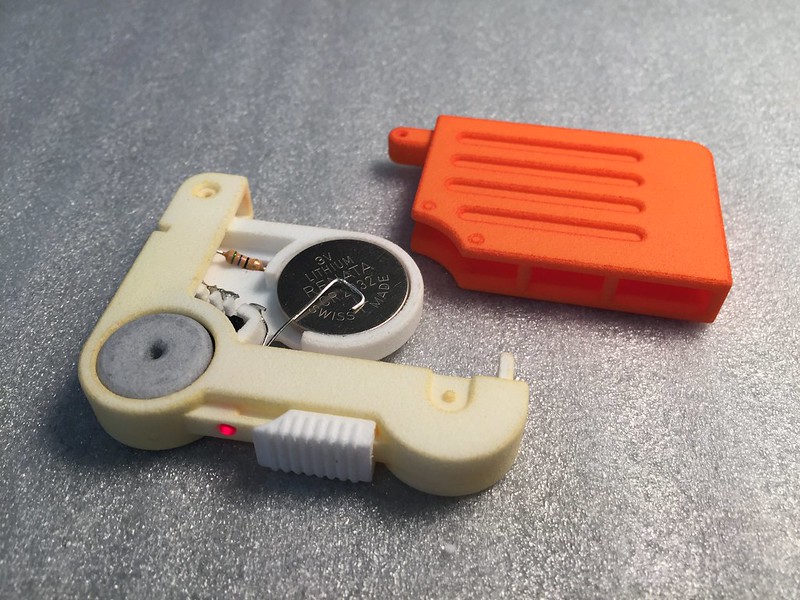 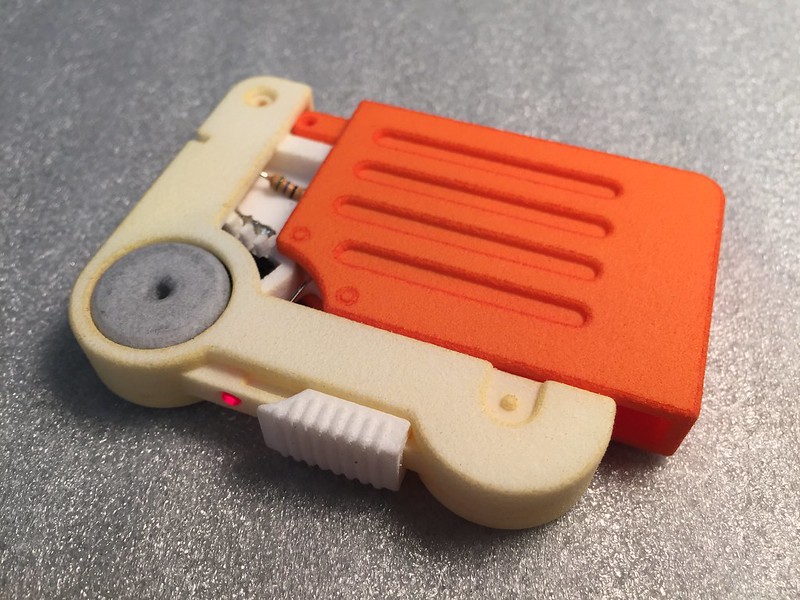 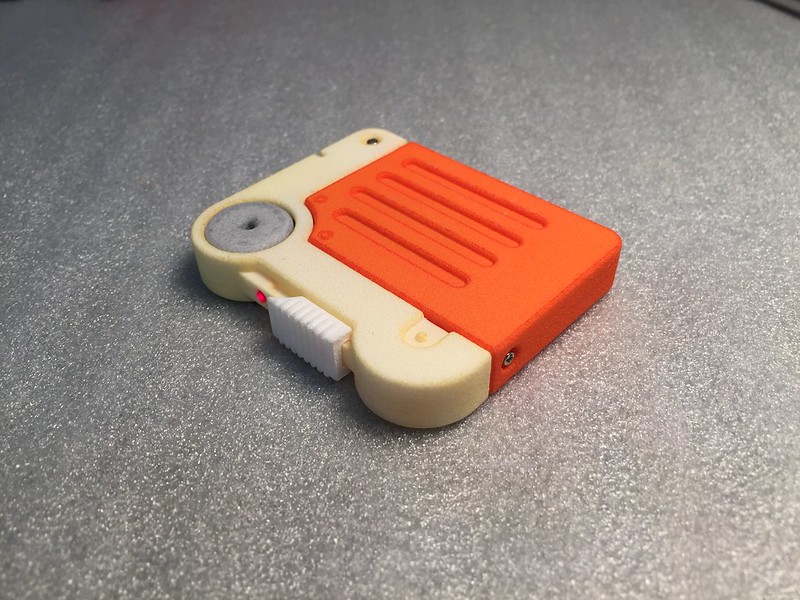 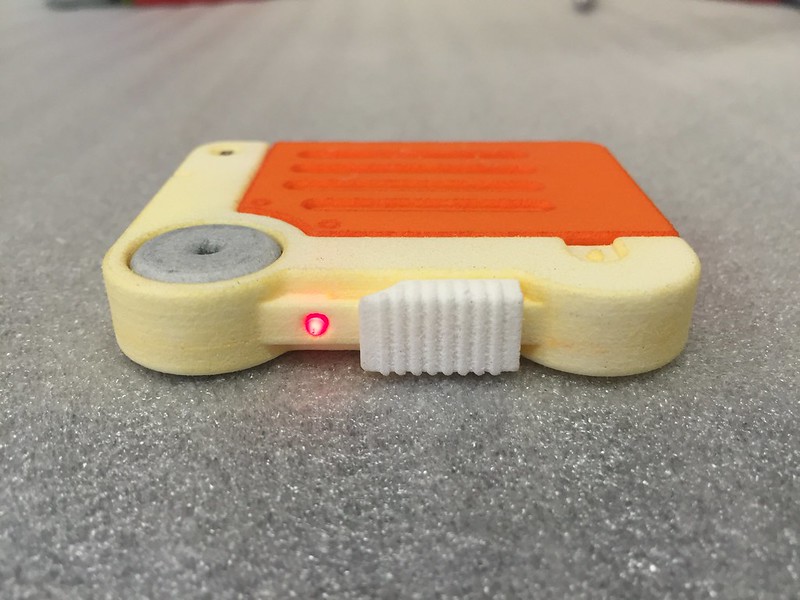 Assembly is complete, enjoy your new Holotape and show it off to your friends. 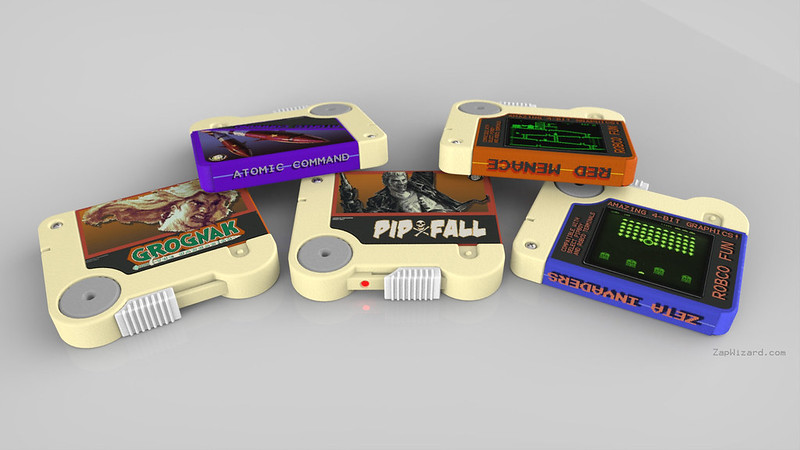 For those who haven’t played the game, there are five mini-games that come on Holotapes.

These effectively look like old video game cartridges. What I did was design a new piece to replace the orange component. This piece is 0.5mm thinner on three sides, in order to accept the application of an adhesive label.

Now if you want to build a game version of the Holotape, you just order the “Label ready” component. You can order it in white and dye it, or try and see if you want to use one of the Shapeways pre-dyed colors. 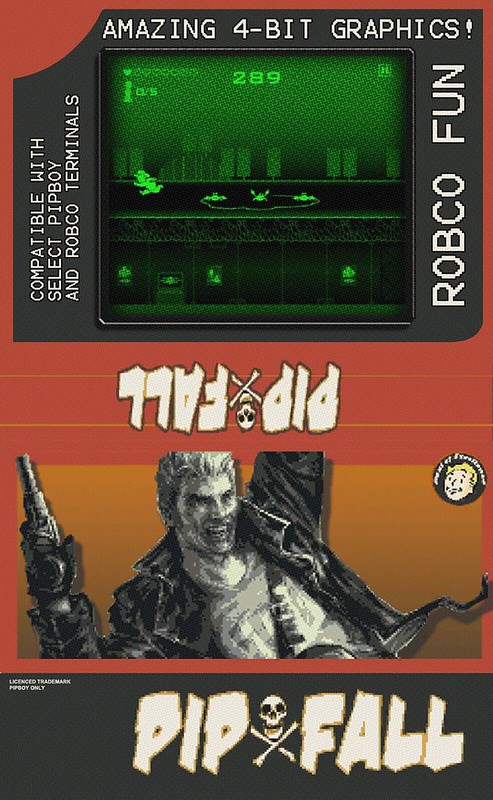 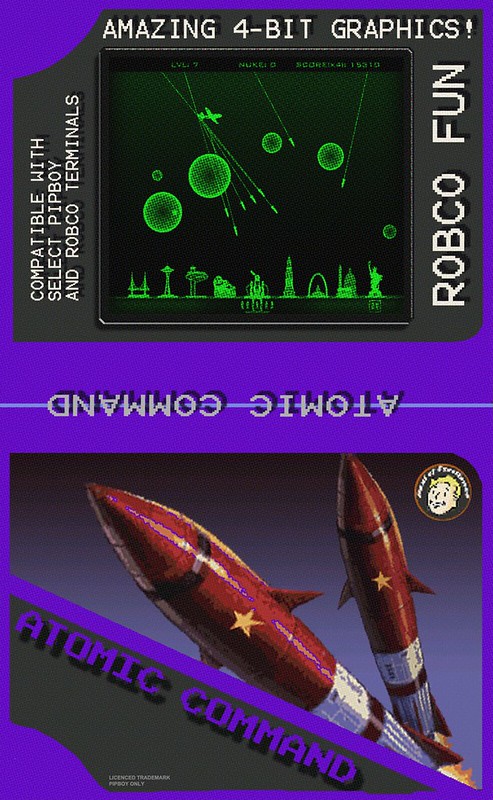 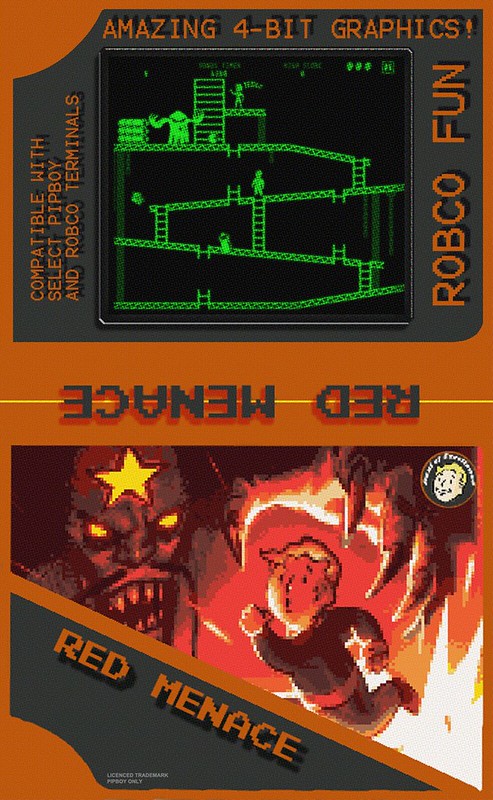 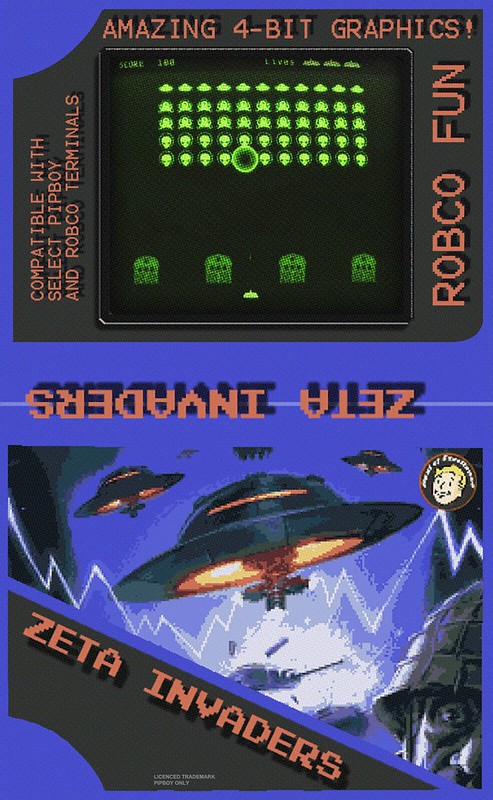 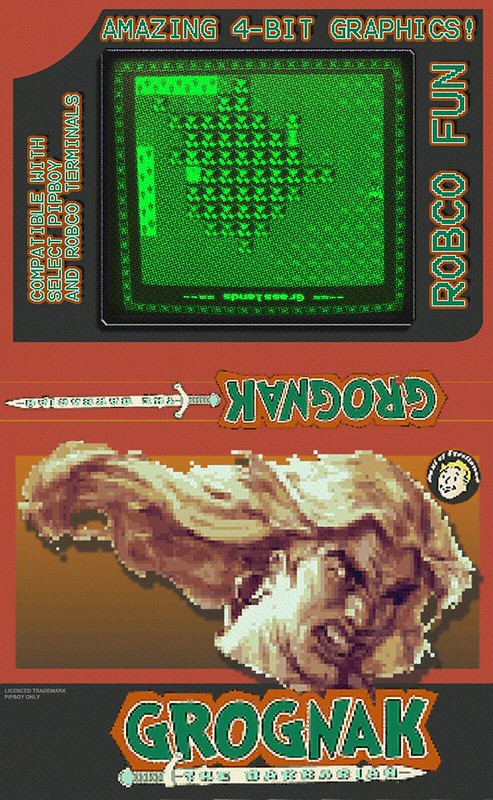 I also designed artwork for each holotape. I extracted the in-game texture for each tape. The in-game texture didn’t included a backside, so I made one up. Carefully matching the existing themes. I also applied a halftone effect over the whole thing to simulate a cheaply printed design.
Print the images at 49.6mm wide in order to scale correctly to the Holotape

Note, the middle text on each is flipped to keep in line with how the label looks in-game.

Check out my YouTube channel for videos on products, projects, or anything else I may be into at the moment.

I am always working on something. It may be an original design, video game, prop, or other long term projects.

Check out the Prop Replicas and other projects I may be working on or recommending.

Save $10 on any order of four or more items. Applies only to items fulfilled by Shapeways. Discount added automatically at checkout.